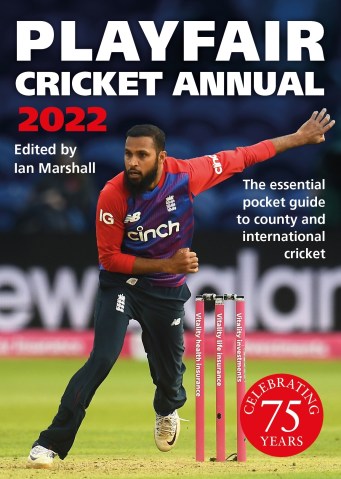 The 75th edition of the Playfair Cricket Annual is packed with all the information you need to follow the cricket season in 2022, as well as a review of events during the previous twelve months.

As Playfair reaches its landmark 75th edition, it is hard to imagine that we have ever welcomed a new season with quite so many issues dogging the game as now, both on the field and off it. On the field, I write this as England begin a series in the West Indies hoping to turn round a run of form that has seen them lose their last four series, latterly avoiding a 5-0 whitewash in the Ashes thanks only to a last-wicket stand by veteran bowlers James Anderson and Stuart Broad, who held out for a draw in the fourth Test. The decision not to take them to the Caribbean remains, to me, a baffling one. As it is, England go into a series where victory is essential to start the rebuilding process with a frontline bowling line-up that (Ben Stokes apart) has won a solitary cap between them in the West Indies.

The challenges of the last two years, with Covid isolation protocols and team bubbles, have begun to take an increasing toll on our players. Jason Roy recently became the latest to take an indefinite leave of absence from the game, but we are seeing many other top players from around the world taking breaks or retiring from one format or another. Yet still, despite these clear warning signs, we cram the schedule with more and more tours, formats and matches. Money is the driving force, of course, but inevitably the quality of play will eventually suffer as players opt out or play on when their tank is empty.

Some might argue that we have seen this in the performances of England’s Test batsmen of late. These things can be cyclical, but one hopes the noises emanating from the ECB that they understand the importance of Test cricket will lead to a domestic framework that gives our red-ball batters more of a chance. As it is, the Test career records on pages 53-63 reveal that just four England players have a Test average of more than 35: Gary Ballance (debut 2013-14), Alastair Cook (retired), Joe Root (debut 2012-13) and Ben Stokes (debut 2013-14) – eight years is a long time to wait for another to announce himself. Of all the Test-playing nations, only Ireland has fewer batters above that benchmark.

But perhaps the most damning events of the close season came with the allegations by Azeem Rafiq about the racism he faced at Yorkshire. The experiences he suffered were bad enough, but the way that the cricketing authorities handled the issue was arguably even worse. Under parliamentary scrutiny, so many of the game’s leading figures came across as (at best) desperately out of touch, and too quick to deny that there might just be an issue here. Cricket needs to provide a welcoming environment for everyone and a pathway for all players to progress as far as their abilities and potential will take them, if they want it. The make-up of our county squads suggests that we are missing out on bringing through enough players from more diverse backgrounds, whether it’s their race or their schooling that is preventing them from going further.

This year’s worthy front cover star is Adil Rashid, who ended the IT20 tour of the West Indies as England’s all-time leading wicket-taker in this format (with 81), overtaking Chris Jordan, while the ICC rankings put him third in the world. The Yorkshire star has become a master of his profession, and he now has 300 international wickets for England.

We will be welcoming New Zealand (again) and South Africa for Test series this summer, as well as India, who will play one Test held over from 2021 plus some white-ball matches. I hope they will provide plenty of inspirational cricket in front of packed houses as we look to move on, finally, from the Covid era. As I’ve often urged in previous years, let us take the opportunity to get out there and support our local county this summer – and don’t forget to take your copy of the 75th edition of Playfair with you!

Records Tumble for Surrey at Beckenham

Somerset, who had gone almost a year without a win in the Championship, recorded back-to-back victories with a thumping triumph inside three days over West Country neighbours Gloucestershire at Bristol. Put in to bat, […]

Stokes Blasts Back into Action with 17 Sixes

Surrey recorded a comprehensive win by an innings over Northamptonshire at The Oval inside three days. When the home side were put in to bat, skipper Rory Burns took full advantage making 107, his […]

At Taunton the home side were put in to bat by Warwickshire. Matt Renshaw got Somerset off to a great start with his innings of 129, his best for the county, as all the […]

Shan Masood at the Double

The hosts chose to bat first at Canterbury against Hampshire and were heavily indebted to Daniel Bell-Drummond’s 149 for taking them up to a solid first-innings total of 305, but it was Keith Barker’s six […]

Having won their first match, Hampshire went into their fixture at The Oval full of confidence, but they met an on-form Surrey side who won by an innings inside three days, a result that […]

After two years of Covid-related disruptions, the LV= County Championship decided to continue as if it was still 2019; unfortunately, initially the weather owed more to the winter past than the summer ahead. Champions […]

The Company referred to in the Privacy Notice, including as Data Controller, is as follows: